We brought you another Female Common Darter Dragonfly 11 days ago, but this new set shows the female in a more normal pose.

This is a head-on view of the 'face'.

To our relief the swallows have suddenly re-appeared complete with families to feed. The lighting wasn't too good but we had a go anyway.
In a montage from last year they are seen feeding on the wing:-

This year first effort is easier to see yourself - look for this wherever you see young swallows perched on wire, gutters, TV aerials etc. If you would like a large version as a September 2008 Calendar click on Woodland Trust Calendars

The moorhen have raised 4 chick to nearly adult size, and have started on a new brood on a new nest close to the previous. Here an adult in fine breeding condition comes for late afternoon snack but will have had to have waited for our evening round.

Raw corn and peanut butter anybody? His beak isn't really suited to this mix, but he is determined to get it anyway.

The little owl has abandoned his original spoil heap and is using other bare ground & standing on fence posts (where they are 'traditionally' seen). The first image is on a post with the stuck-open bridleway entrance in the background. One eye is obscured by a leaf.

Here he is on his new choice of ground, the owl watching us watching him.

A buzzard appeared from nowhere, made a few loud calls that got Roy stampeding out with the camera, and then did a couple of circles at about 15m high before disappearing out of sight.

Huge number of our acorns have become deformed by insect invasion. This type is called a 'Knopper Gall'.

A juvenile heron visited the 'Duck pond' and walked around for a few minutes. It was obvious it didn't enjoy the strong wind ruffling the feathers. We didn't see him catch anything.

He took off in no particular hurry - these two successive frames were taken probably 150 mSec apart.

Most landings are perfect elegance (we could show you dozens a night) but they don't all go as planned.

All that sticky fruit pulp needs wiping off?
It's never occurred to us before that maybe birds can't 'wipe their beaks' with their tongues like we 'wipe our lips'.

This rainy night (7.5mm in the rain gauge) was soaking the few creatures who decided to venture out. Examining the twisting of various parts and the flying raindrops suggests this rabbit was doing the classic twist and shake to shed some of the wet.

A female Common Darter dragonfly warming herself on the back of a garden seat, positioned herself vertically to catch the sunshine. A newsletter recipient tells us this is called the obelisk position, normally used at midday to keep cool.

A minute or so before the above it was on a stone where we took this close-up of the head and thorax.

... and from the same frame extreme detail of the eye.
We have never noticed before that the eyes not only have two separately coloured areas, but these areas have different 'honeycomb' sizes and curvatures, presumably with different optical characteristics. You could spend a lifetime researching these amazing creatures so little changed from fossils millions of years old.

The left and right halves of this pic are separated by 17 minutes at 2 a.m. but make an attractive pairing. We haven't seen the vole for some time - the log had been sinking into the ground so that it had not been breaking the beam.

Hope you laugh at this is much as we did. Nothing else animate in the original frame, so no real idea what it's doing.
Practicing for the Rabbit Olympic High-jump, maybe?

Two views of a young robin begging for food from a parent. First the whole story with an off-focus parent to the right.

Nice show of the underwing of one of 'our' developing young robins.

What must it be like to have a tail you can do this with?
From the position of the left front leg we rather imagine the mouse was caught in the middle of giving it's tail a groom.

Rabbits have now replaced pheasants as the dominant species visiting the camera site 2. This is a genuine single frame of pair of rabbits possibly using the log like a 'kissing seat'. But then maybe we are just too romantic.

This is a bit of a fiddle, but the robin was originally off the edge of the frame (with tail missing) so we moved him across to make a more compact offering. Recently seeing more birds and rabbits together than we are used to - any significance unknown.

Fieldmouse (Wood Mouse) and Snail at the Camera 1 fruit stall.
Their visit were actually 9 minutes apart but we could not resist bringing them together.

Dragonflies really are incredible creatures. Unlike the one shown a few days ago this is definitely a female. Sexing can be difficult - the colours change with maturity and even with temperature and other characteristics don't appear in photos

Here is a head shot with an inset showing the compound eye.
Compound eyes are an array of uni-directional cells rather than lens and retina. Resolution is poor but they have huge angle of view, are lightweight, detect movement quickly, and some detect polarisation (used to navigate by skylight).
More info at Wiki Compound Eye.
The streaks on the eye in the main image are Moire (artificial digital patterning) effects at the reduced resolution used in these archives.

2 Buzzards in the same general area inevitably seems to lead to a skirmish. These had several 'goes' at one another over about 10 minutes before they parted ways.

This is the female Common Darter Dragonfly perched on a stick at the pond edge - a favourite way of getting to see them close up. 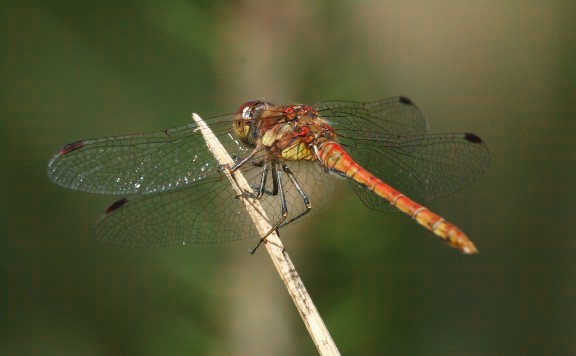 To complete the cycle here are a pair coupled together (male above) coordinating their flight to repeatedly dip the females ovipositor (her tail tip) in the water to deposit eggs. In the original you can see that the water surface tension is still connecting her to the surface.

As promised in the image for 2 June 2008 we have tried to photograph the Male Banded Damoiselle. Well some effort brought the luck - here is the beauty.

The Little Owl is still spending hours on the dirt patch. Here he was having such a satisfying stretch we almost wanted to do the same.

This is a Hawker dragonfly - the largest type. In the words of an old TV documentary we saw a couple of weeks ago, it will kill and eat 'anything smaller than itself'! Our experts differ on whether this is a male or female.

Here is the powerful mouth and segmented eyes.

Not seen a robin in quite this pose before. He is probably trying to wheedle a bit of nut from in a crack in the bark.

Darter dragonflies are smaller than Hawker Dragonflies. They tend to perch on twig, dash out for a fly round, and then return.

In this detailed shot you can see it is 'dusty' even over the eyes. When he has warmed up he will probably 'preen' himself clean.

Took the opportunity to get a closer image of the Little Owl (see 26 July 2008). It only stressed for us that they are about starling size.

Some more Odonata (Dragonfly like insect) today and at least a couple more alternate days. This female Banded Demoiselle (a larger than average damselfly) is quite different to the male which is blue and actually HAS got bands on his wings. Hope to bring you her 'husband' if we can catch him for some photos!

Detail of the head - love the iridescence.

This male blackbird seems to be really going for a 'mixed diet'. We make it 2 worms, a few chips of peanut all mixed up in sticky fruit pulp. Forget the worms and it sounds lovely.