The Pheasants are back in numbers - probably now 'stuck' here by the lack of cover on the sheep cropped grass all round us. The pheasant don't from choice cross ground with nowhere to hide.

One of the female pheasants fastidiously picking up a berry cluster.

Female chaffinch coming in to land on the well laden trunk top off to the lower right.

In just a few years Marsh tits have moved from seeing occasional individual to regulars - and in this case 2 at once in the same frame.

One visited the tree stump some 70m away for a decent portrait.

A cheeky looking rook with all that interesting white face detail.

A quick look and sniff to see if clambering up is worth the trouble. Drat - the cat has licked up the peanut butter!

This is a simplified version of our 2009 Christmas card.
Best wishes to you all.
Front:
We haven't seen a lot of the Muntjac deer through the year, but early on midsummer day this beautiful fawn took it's portrait.
Back: (View 'Landscape')
We have been enjoying owls again this year - not in the same variety as last year, but this magical Barn Owl flew over the pasture to our North in February.
Building works at a neighbouring farm displaced the Little Owls (proper common name) that lived in a now demolished barn. We now have at least 2 of them increasingly visiting around our house. This one took it's picture mid October outside the kitchen window, and we now see them lurking in the orchard at dusk and dawn, and hear them duetting over the CCTV audio!

A portrait of a great tit hanging from the top of the tree stump with unusually clear view of the claws.

The more disreputable the fruit, the more the mice seem to like it.

This is a short audio recording of a pair of Little Owls calling in the orchard (in mono unfortunately but you can hear the difference). Click to hear: MT2_20091113_1637_038_CCT 2 Little owls calling (crop).mp3.
We typically see the little owls like this - peering through the branches of nearer trees. The 'red eye' is the standard problem with flash close the camera reflecting off the bird's retina & we decided to leave in it's dramatic effect. A more conventional Little owl image can be found at 11 Dec 2009 and another in-flight 20 Nov 2009.

The perch by the kitchen window peanut feeder is the site of many disputes, including one between this pair of greenfinches.

Not since the strange CCTV captured event with the cat (see 10 Nov 2009) have we 'seen' a polecat. It obliged with just this one frame in the middle of the plot.

This female kestrel was hunting from the wires in a strong wind.

At the right of the site one bird is just disappearing and wouldn't you be with such an energetic pursuer. The curved wings are genuine flight stress bending and not some camera artifact.

The robins are all in splendid colour.

This kestrel had taken a meal to a distant phone pole and just wouldn't be removed by either a jackdaw or these 2 magpies which followed up the harassment.

The wonderful defense of thistles doesn't seem to be very effective on this sheep at least, who spent several minutes carefully selecting thistles rather than the (poor) grass also available.

You would think that this sheep would be really annoyed by a magpie climbing all over her face, covering an eye and pecking at the wool, but they seem very tolerant. In this photo the magpie wasn't landing but had walked down the face and was climbing back up.

But eventually she did shake off the bird. Maybe it had managed to scratch an itch at one of the sheep's acnestis.
acnestis (pronounced AK-nist-uhs) means 'The part of the body where one cannot reach to scratch' - a word we picked up a few days ago from the Wordsmith.org daily mailing a few days ago and couldn't resist using - we had no idea a word for this existed!

Lets have a rave for the house sparrow in sad decline.
This is the first time we have recorded one at this feeding station outside the kitchen.

Unusual view of a Greenfinch showing more green than you usually see. Looks almost luminous - we haven't 'wound up' the colour.

A glorious male chaffinch showing us all his colours except for the blue beak he has only in the breeding season.

The Leopard slug seems to have found a whole windfall apple to rasp at with his radula.

Having finally identified a night-time bird call as little owls we are now clued in to finding them. At the moment we have at least two visiting and they have been momentarily spotted together about 25cm apart on a tree branch. But more often they are calling to each other in a wonderful ping-pong stereo effect. Here is one of them at the top of a telephone pole.

We think starlings look wonderful. The bird on the right was calling.

The kestrel and a jackdaw had a little spar up in the distance but the kestrel finally got the upper hand and drove the jackdaw down to the ground (always, of course, out of sight!). The is an accurate montage at about 7 fps.

This kestrel caught a mouse in the grass, flew to a fence post with it in one claw and proceeded to devour it.
(The montage is mirrored to provide left to right flow so the prey is in the right foot should it matter to anyone.)

Watching a Kestrel bird dropping in height in steps before diving onto prey never ceases to thrill us. This is an accurate montage at about 7 fps (so this sequence lasts a bit less than a second).

The kestrels really are resisting corvid harassment very determinedly this year. This rook spent several minutes flying over this kestrel from one side of the wires to the other, waiting a few second and doing it again (we think about 5 times). This accurately positioned but arbitrary selection of images was from a right to left flyover (into the wind where it could hover). The kestrel only moved it's head to watch so we started assembly of this montage using the kestrel belonging to the top rook.

Watching a Kestrel bird dropping in height in steps before diving onto prey never ceases to thrill us. The top bird is accurately positioned where it made it's final hover. The 5 lower images are an accurate montage at about 7 fps (so this part of the sequence lasts a bit less than a second).

The Pied Wagtails visit from November through February and the most likely place to find them is on a sun warmed area of roof slates - they work round the house as the sun moves round looking for insects drawn into action by the warmth. From 2 years ago we include a montage of bird chasing after an insect. This year we so far have a victorious capture on the roof ridge. 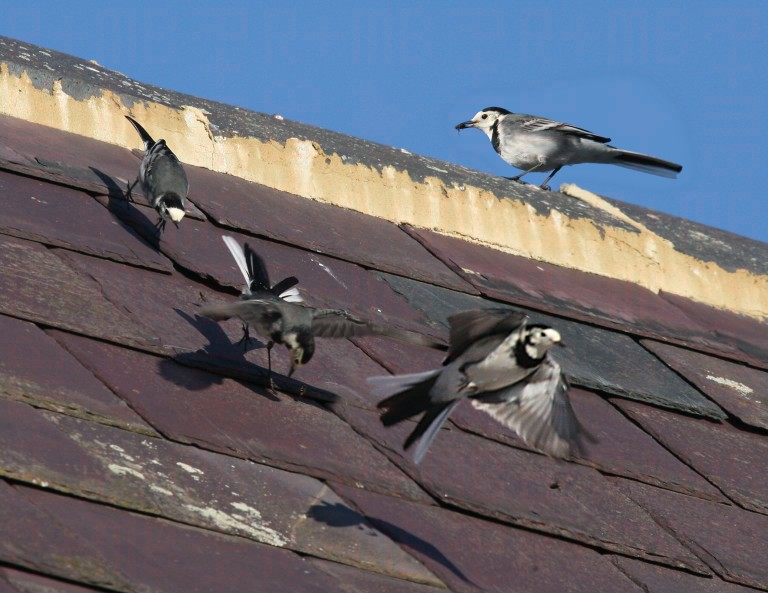 The Grey squirrels are feeding like mad to fatten up for the winter cold and leaner pickings. Contrary to what many people believe they do not hibernate but only come out of their drays for short periods to feed.

A bit of fun with probably the same fieldmouse (wood mouse) over some 5 hours on 1 night. So far we think we are seeing just this one young mouse at this new site.

Jays are just so beautiful! They are about the same size as magpies (and belong to the same family of corvids). No doubt this one will be burying loads of acorns for winter feeding, many of which will sprout next year.

After preparing this we enjoyed a BBC Autumnwatch TV program also eulogising about Jays and Magpies.