This Migrant hawker dragonfly female was hunting over our North boundary on a chilly but sunny day and this was taken as she flew by into the wind slowing her progress enough to follow it with the camera. Note how the legs are neatly folded underneath - something you don't see in our indoor pictures because the insect hasn't had time to pull them up.

Two montages to tell little stories.
In the first the two outer birds are approaching simultaneously (with no hint of threat) but too far apart to make a good picture. But the next frame 5 minutes later showed them apparently enjoying each other's company so a long thin take on the 2 suggested itself.

The male Kestrel getting mobbed by a couple of rooks. A strong wind right to left meant that the birds overlapped so we have about doubled the real horizontal spacing.

A Dunnock gives us a view of it's underside, claws and both of the Alulae (singular Alula) which are the birds 'thumbs' with a few feathers on that it raises to help prevent it 'stalling' at low speeds. Note the head and wing shadow on the bark on the stem of the hedging.

Either the bats have suddenly started using the loft again, or they are doing so at a time we can get to see them - about 05:45 in the morning as they return to the roost in the loft. Morning is better than evening for photography as they have a last hunt and often have to 'queue' to squeeze into the entrance under the eaves. In the evening they tend to zoom out of the hole and leave. Here 3 bats flew by the entrance hole hidden under facia top right. We guess there something like 10 bats altogether.

And our favourite single frame with all that wonderful texture in the stretched wing membranes.

Despite the poor weather the brief periods of sunshine brought out a few dragonflies. They are getting a bit tatty now following encounters with blackberry thorns etc., but worth a few outdoor images on-the-wing. It is really only possible when they hover for a moment - here two frames about 150mS apart as he drifted forward a little.

This is a common Darter dragonfly seen next day perched on a leaf while it warms up.

The end of a months long drought has converted the pond margins into something better than liquid mud to the main pond has brought back some of the moorhen family. First one of the adults.

And now one of this years juveniles. The vivid green tiny leaves coating the water and lower parts of the birds is 'duckweed' a thin layer of which comes and goes on some of the ponds.

We must have seen these Spotted flycatchers before, but have not recognised them. First a portrait.

And now a moment from their hunting technique - sit on a wire, post or branch until you see a tempting insect. Launch towards it (may be 0.5 to several metres away), grab it, then fly back to your previous perch or another one nearby. Here we were lucky to catch the exact moment of the insect inside the beak but not yet captive - it did get it judging by the following two frames.

Adult swallows sometimes feed their youngster on the wing. They generally rise up facing each other to get the appropriate beak alignment for just a moment.

How do the insects get taken in the first place? The speck top right is an insect from the frame with the bird image nearest it. The left bird image is the same bird about 150mS earlier but the insect was out of the panning camera's frame and there are no other references so we put it somewhere 'pretty' and probably much too close!

Swallow parents usually feed their youngsters by giving perching juveniles a beakful of insects without landing themselves. With one beak inside another it is always difficult to see the moment of transfer, so from 2 different encounters first we see the approach with the adult's beak overflowing with insects.

And now the adult reversing out to fly off leaving the juveniles beak now similarly filled.

A Hobby arrived pursued by a couple of jackdaws for an extended aerial dogfight tracking round the area. Here the jackdaw was closing in on the Hobby.

Finally the Hobby had enough and got the advantage - they really were this close. The encounter drifted off to the East and we lost them in the haze.

We have often wondered what happens when the Kestrel and Sparrowhawk happen along together. Well it turns out to be an extended fight - here are 8 time ordered pairs in a chaotic montage, moving from dark blue sky overhead to pale haze lower down but further away. All these are at the same scale.

The excitement of what the bird hopes is a parent arriving with food.

This bird decided not to wait and went chasing after the parent.

Crouched down to spring on the - err - fruit?

Processing autumn's bounty means the wildlife can't move for peelings and rotten bits, so they clamber over.

At another site, also loaded with fruit, we have the winner of the 'Twee fieldmouse (wood mouse) of the week' competition.

The local Sparrowhawk doing one of it's high speed fly-bys.

On a ramble down the bridleway we spotted this Little owl - the species name of this day and night hunting owl. We normally see it on the high voltage wires in what is obviously it's territory.

But this is a genuine single frame of two young fieldmice (wood mice). Perhaps they are rehearsing the balcony scene from 'Romeo & Julliet'.

Did the vole suddenly appear over the stone and frighten the life out of the shrew?

Male chaffinches are squabbling all over the site. These two look like they have given up mild skirmishes to decide the issue for now at least.

A line of Lodgepole pines at the edge of our mini-meadow facing roughly South are not ideal for the trees behind but they make a magnet for dragonflies on cool but sunny days. This is a Migrant Hawker Dragonfly sunning itself before setting off on another patrol.

Another individual (different detail in the markings) has chosen the end of a pine cone to bask.

During a poor year for flycatchers a brief sunny period after rain brought out a few Swallows, 1 swift and this House Martin which has lifted its head to snatch the insect you can just see as an elongated smudge half a birds length ahead of it's beak.

Another view of a House Martin banking really hard in flight.

A sunshine and heavy showers day produced some wonderful clouds. To the East was a blue sky with a few cloud tendrils and to the West at the same moment was this wonderful chaotic sight.

The heap of food looks good enough for us to tuck in, and the slug and fieldmouse (wood mouse) seem to agree.

We don't know where the twig of Hawthorn berries came from, but in the gales bits of the old black poplars are ending up 50 metres from them so these could have blown in from a number of our trees.

Two views of what is probably the same young blackbird 20 minutes apart.

This is a montage of two images about 1 minute apart each with a really young bluetit (2 images at the left) accompanied by an adult (2 images on the right) all in their original positions. Both bluetits and Great tits have 'second brooded' this year.

A bit of sunshine tends to bring out the butterflies on even quite cool days. These two were enjoying a sheltered patch of blackberries (brambles) when we 'invited' them in for a photo session.
First a Red Admiral butterfly.

This is a speckled wood - the dominant butterfly LAST year and quite common this year.

This Migrant Hawker Dragonfly was for once flying low enough over a hedge for us to net her and bring it in for a few minutes taking photos.
Several years ago the Hawk and Owl trust determined that pellets from hobbies mostly contained the remains of Migrant Hawker dragonflies. But it is not so abundant this year - we have been pleased to see just one or two. 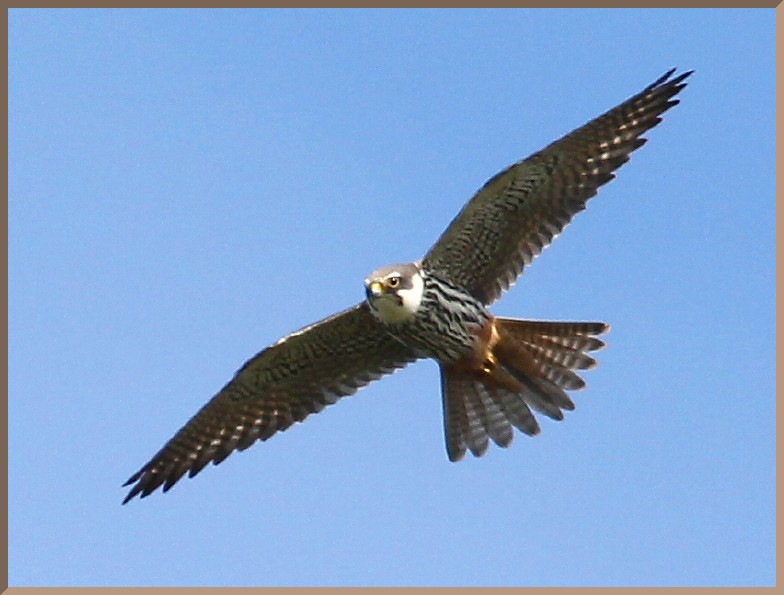 Several (what we think are Brown Long-eared) bats were swirling round the house just before dawn. Here we have montaged 4 successive frames taken at about 10 fps of two bats flying in together but going off in different directions. If you want to work out which bat is which yourself work it out now before you get to the annotated image 2 below this one!

Detail of the bat on the left.

If you enjoyed the impression, you might find this annotation of the two flight paths of interest. The entrance hole to the loft is in the eaves close to the upper wing tip of the bat at the end of the 'green' sequence.

A young grass snake was under the corrugated iron to warm up. It panicked when we lifted the cover and then the back edge of the metal blocked his normal exit, but it stopped for a moment, and found a another route. It didn't use the hole in the ground used by the larger snake - maybe it was 'occupied'.

A larger grass snake basking in the sunshine at the end of the day in the sedge at the back of 'Duck pond'. It stayed for several minutes apparently completely still while we watched and captured a few images. The insert was 3 minutes after the main image and you can see it has barely moved relative to the plant stems. This is the first time we have noticed a grass snake basking in this manner.

A pair of full moons Monday evening and the following morning. Full moons are always the opposite side of the sky to the sun so you don't see the sunrise or sunset. However, the cloud in the first image is lit pink by the sunset.

The moon in the second image has the same tint as the cloud in the first because of the atmospheric conditions that colour sunrises. We haven't altered the colours at all and the camera colour balance is locked to daylight.
The flattened shape is caused by atmospheric refraction near the horizon.

A young robin and a chaffinch male skirmish.
Who swerved first?

In 26 Sep 2010 we showed you a male Emerald damselfly brought to us for some technical photos (see previous description). To complete the study we photographed some more males and this female.

A common darter dragonfly in flight. Darters dragonflies are intermediate in size between Damselflies and Hawker Dragonflies and you may spot them perching on overhanging pond side foliage, taking off and returning to the same spot.